MYGOSSCON Observations, and Notes on Open Source in South-East Asia

This week, I attended the Malaysian Government Open Source Software Convention (MYGOSSCON), promoting PostgreSQL and LedgerSMB to both public and private sector entities.  We had a simple booth and had approx 100 people stop by over the course of the two days.  We also talked with a wide range of other exhibitors and came away with a sense that we can expect great things in South-East Asia regarding Open Source. 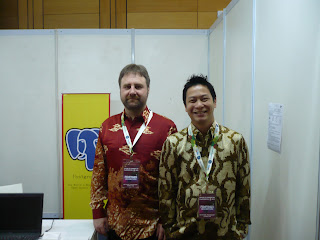 It was immediately clear that PostgreSQL was a star technology at the conference, with a strong showing by EnterpriseDB and EnterpriseDB resellers.  We were the only project specializing in the "community edition" as EnterpriseDB calls it.  We had a lot of people stop by to talk about PostgreSQL and share success stories, answering questions about the differences between Oracle and PostgreSQL, between PostgreSQL and MySQL, and between EnterpriseDB and the official release version of PostgreSQL (I refuse to call it the "community version").  I was told that there would be few who knew databases, but while there were only a few database experts at the conference (which was to be expected) there were a lot of people who had a solid working knowledge of database systems generally and had lots of well-thought-out and valid questions.

Indeed people would see the other signs at our booth and keep walking... until they saw the big yellow banner with the blue, white, and black PostgreSQL logo on it and then walk right over.  We got questions that I knew the answer to, questions where my answers were slightly out of date (areas of Pg vs Oracle), and questions which I had not really prepared for at all (asking about Arabic support for PostgreSQL).  Unfortunately with the internet connections overloaded at the conference, I had to do the best I could, and promise follow-up as necessary.

One typically goes to trade shows expecting to build awareness for one's products and services with the idea that this will grow the market later.  In this case, however, we walked away with companies interested in hosting LedgerSMB, possible maintainers for other language translations, and a couple of actual, actionable sales leads.  We were extremely happy with the way things went.

However in addition to talking with civil servants and educators, an important undercurrent emerged in my discussions with purely private sector individuals (often other exhibitors):  open source is rapidly growing here in South-East Asia, particularly in the public sector.  The major limiting factor appears to be supply if individuals with relevant expertise and experience.  This is not to say that such people aren't available, but rather that demand significantly exceeds supply which is common in growing markets.  This isn't just the sorts of things we experienced first hand, caused by entities trying to reduce the amount that they spend primarily to Oracle, but instead part of a much larger trend, with governments in the region.

As I typically try to point out when advocating open source, the decision to prioritize open source isn't just about money, but rather the differences in dynamics surrounding money lead to a number of important benefits including a larger percentage of the money to launch a project going into the local economy, and the added flexibility that occurs when one does not need to worry about acquisition of software licenses in order to put data to a new use.  This leads to local power both economically and in terms of decision-making.  According to other consultants, this is not limited to the Malaysian government and other governments in the region are increasing their commitment to open source software.

All around South-East Asia, my sense is that there is a sense that open source will be a major economic asset to the region and something to be cultivated.  It is a good time to be in open source over here, but there has never been a better time (and probably never will be a better time) to be in open source databases.  PostgreSQL is, in particular, poised to start penetrating Oracle's home market, with projects like Gridsql and Postgres-xc reaching maturity.  I believe we are to the point where no corner of the market is safe any more, and where the adoption of an open source lifestyle for businesses and governments will become the norm rather than the exception.

I think that last sentence follows quite directly from open source database systems coming of age.  The large, multi-application database systems (DB2, Oracle, MS SQL, Terradata) represent the last major piece of IT infrastructure for which open source solutions were inadequate.  I say multi-application to differentiate from the "app-stack" approaches familiar to LAMP developers.  Typically here we are talking about heavily engineered databases designed to have a significant number of applications solving different issues, manipulating their data.  However, as this piece of infrastructure begins to fall to open source, then all the back-end software can be open source or in-house.  At this point, one has to ask whether one should simply bite the bullet and start migrating the front-end (desktop/laptop) devices as well.  Pushing Linux-based desktops in government and business would almost certainly have a cascading effect to consumer systems as well.

These are exciting times indeed.
Posted by Chris Travers at 3:05 AM

I am one of the most active developers on the LedgerSMB project at the moment.